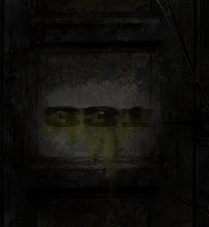 Original pic: an old door found on Pixabay.com.        I cropped and edited it in Photoshop.

Esther crept along the dank, unlit corridor, while the moonlight from the window slowly faded behind her. Penetrating deeper into the eerie depths of Garlmarth Castle, complete silence surrounded her; the only sound was that of her heart beating faster and faster as it slowly climbed up her throat.

The darkness seemed thicker in this place. Fear began to seize control of her rationality, and her mind raced with all the possible outcomes of her journey into this forsaken place. Though the castle had supposedly been vacant for some years, she couldn’t help but feel that she was being observed by some ominous force.

Claustrophobia was setting in. She felt as if the air was closing in on her from all sides; that at any moment it might grab her and whisk her away into nothingness. Suddenly, she stopped. Remembering that she wasn’t alone, she pulled out her cell phone and clicked it on. Desperately, she dialed Thurman’s number. Esther could always count on him, her best friend. He would know what to do. No answer. At least the light from the phone would offer some help, she thought.

Looking up, she noticed a splintered, decaying door in front of her. On it, barely visible, were three grimy, moss covered numbers – 331. A chill ran down her spine as she remembered the stories surrounding this room.

At that moment, the light from her phone dimmed into the night. The battery had died. She stood, staring into the blackness, as her last source of comfort and security vanished before her eyes. She cursed her negligence. Of all the things to remember, making sure that her phone was charged should certainly have been at the top of the list. It was now no more than a paper weight without the vital electricity that ran through it.

She was alone again, in the dark. Should she move forward? She had come too far to turn around now. Cautiously, she reached her hand out and ran it across the width of the door until she found the door knob. It was as cold as the ice in her veins. Slowly turning the knob, she tried to steady her breath. Every moment felt like an eternity. At last, the door creaked open and………….